CertaSIM, LLC is going to attend the Tactical Wheeled Vehicles Conference in Columbus, OH, from February 27th to March 1st, 2023.

This conference brings together leaders from the Department of Defense, the military services, industry, prime contractors, subcontractors, suppliers, and academia to address present and future tactical wheeled vehicle requirements. 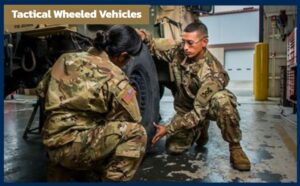 CertaSIM CANADA ULC is going to attend Canada's Largest Global Defence & Security Trade Show - "CANSEC." It is organized by the Canadian Association of Defence and Security Industries (CADSI) and will be held in Ottawa, Canada, on May 31st and June 1st. CANSEC 2023 will showcase leading-edge technologies, products, and services for land-based, naval, aerospace, and joint forces military units. 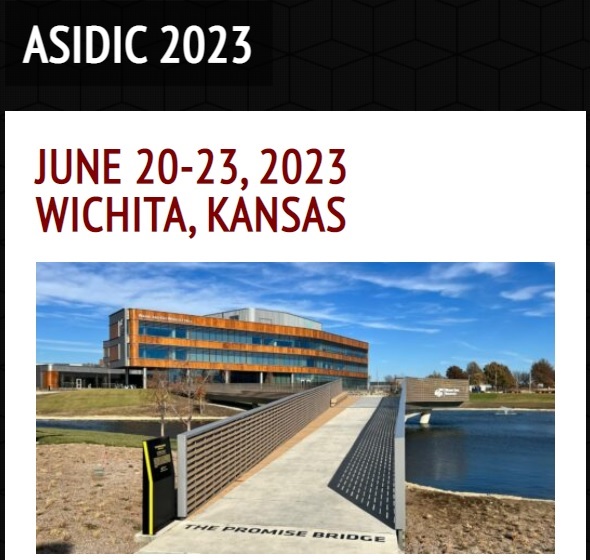 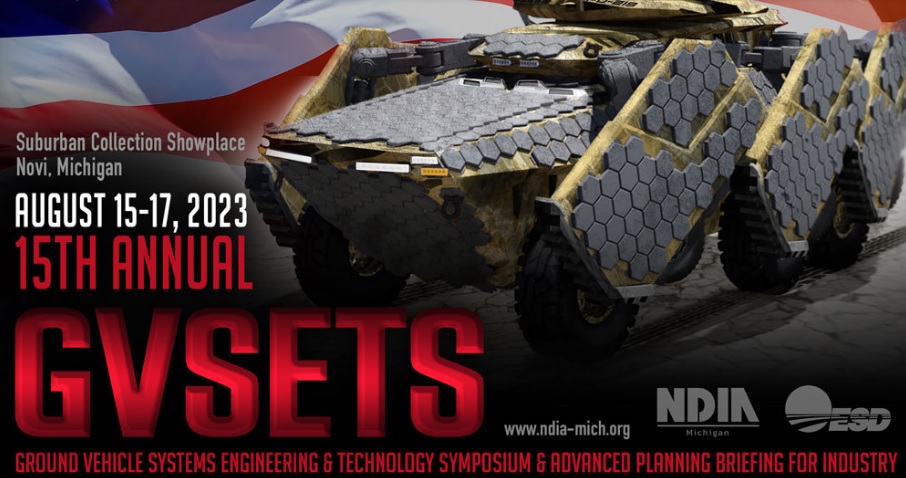 CertaSIM, LLC will be attending the 2nd International Orbital Debris Conference (IOC) held in Sugar Land, Texas, from December 4th to 7th, 2023. The goal of the conference is to promote orbital debris research activities in the United States and to foster collaborations with the international community.

CertaSIM attended the Hypervelocity Impact Society Conference HVIS2022, September 19-22, 2022. IMPETUS was well represented with 2 technical presentations in addition to our Exhibitor Booth.
Thanks to all those that stopped by our booth to ask questions and learn more about the IMPETUS Solver Technology. 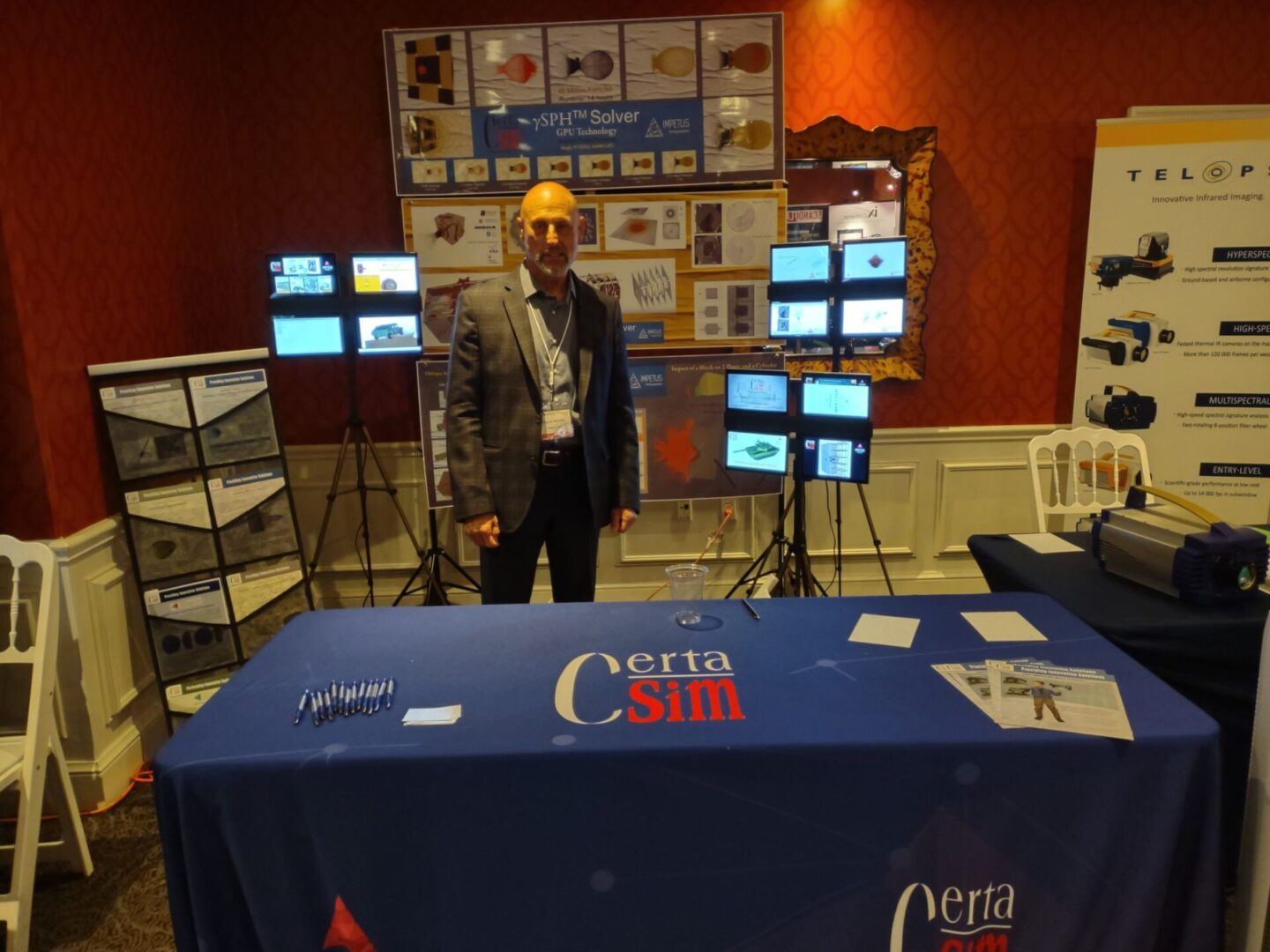 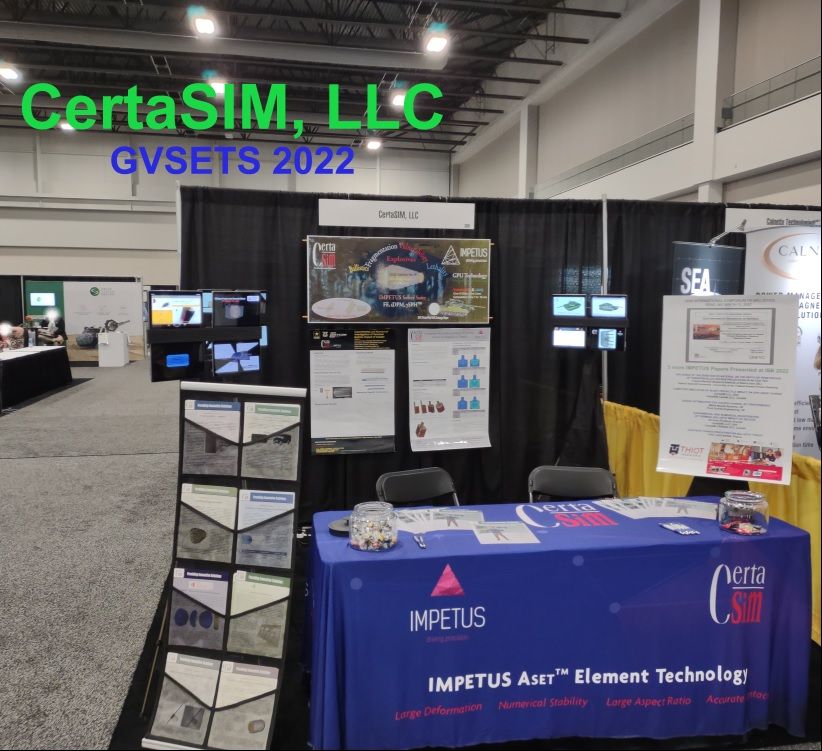 CertaSIM attended the International IMPETUS User Conference 2022, held in Flekkefjord, Norway, on the 28th-29th of June. The agenda contained presentations from the IMPETUS staff on new features, including parametric objects, fragmentation analysis, and VAA (Vulnerable Area Assessment). This meeting also focused on data distribution on Impetus MARKET. It was an excellent opportunity to network with other IMPETUS Users and learn how they have successfully applied the software to their area of interest! CertaSIM gave a presentation entitled: “Implementation of IMPETUS over the Last Decade in the US and Canadian Defense Industry”. 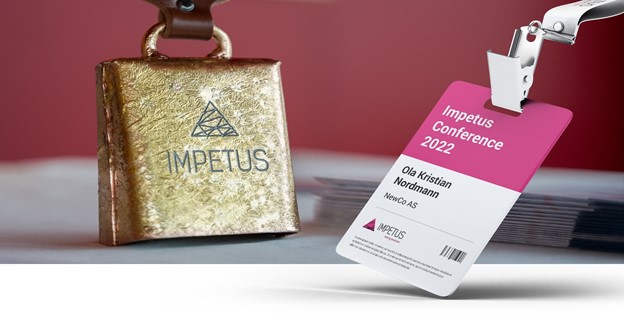 CertaSIM CANADA ULC was a bronze-level sponsor of the annual Canadian Society for Mechanical Engineering International Congress (CSME), held from June 5th to 8th, 2022, in Edmonton, Alberta. This Conference was Canada’s largest research and development conference, focused primarily on mechanical engineering but encompassing perspectives from many engineering disciplines.

CertaSIM, LLC participated in the 32nd International Symposium on Ballistics, held from May 8–13, 2022, in Reno, Nevada, USA. The ISB Symposia has a long-standing international reputation as a catalyst for stimulating research in this area through a wealth of oral and poster presentations and commercial exhibits.

CertaSIM, LLC had a commercial exhibitor booth showcasing the capabilities of the IMPETUS Afea Solver Suite. In addition, the excellence of IMPETUS to model Shaped Charges was again proven by MBDA and IMPETUS France, winning the Neill Griffiths Award. It is given to the paper judged to have made the most significant contribution to a shaped charge technology at the International Symposium on Ballistics. They applied the γSPH Solver in their work. 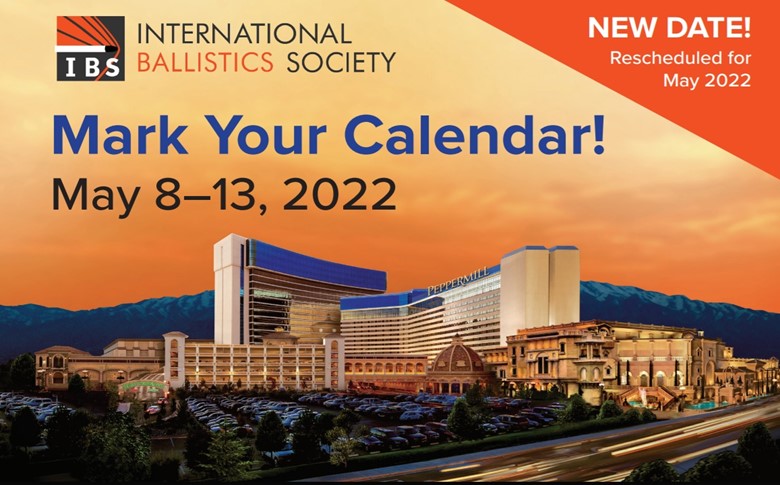 For the 8th Consecutive year CertaSIM, LLC attended the 13th annual Ground Vehicle Systems Engineering and Technology Symposium (GVSETS) & Advanced Planning Briefings for Industry (APBI) conference held August 10th -12th in Novi, Michigan, USA. This year was a live event. It was an excellent opportunity to meet many of our customers in the Military Vehicle Industry and discuss new features in the IMPETUS Afea Solver® after not having met for over a year due to the pandemic. Additionally, CertaSIM, LLC had teamed with AM General to show work related to the newly developed V/L tool in the IMPETUS Afea Solver®. Steve Grate, Chief Engineer in Survivability at AM General, and Morten Rikard Jensen, Ph.D., CTO at CertaSIM, LLC co-authored the paper “Procedure for Fast Ballistic Vulnerability Simulation of Armored Vehicles Supported by Finite Element Results and an Extensive Numerical Sensitivity Study of Key Parameters”. It was presented in the Survivability Technical Session. 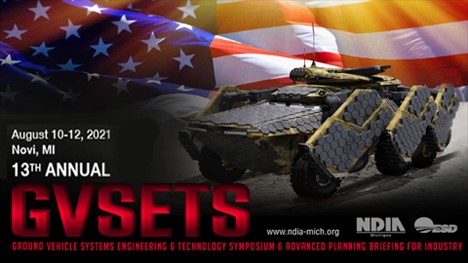 CertaSIM, LLC attended the Ground Vehicle Systems Engineering and Technology Symposium (GVSETS) 2020. Unfortunately, due to the pandemic, this year's event was virtual. Professor P. Mulligan, Ph.D., from Missouri University of Science and Technology, had a joint paper in the Survivability technical session with Dr. M. R. Jensen, CertaSIM, LLC. The research work consists of numerical and experimental investigations of Explosively Formed Projectiles.

For the 6th Consecutive year CertaSIM, LLC attended the 11th annual Ground Vehicle Systems Engineering and Technology Symposium (GVSETS) & Advanced Planning Briefings for Industry (APBI) conference held August 13th-15th in Novi, Michigan, USA. Some of the technical tracks of the conference focused on Modeling & Simulation, Testing & Validation and Autonomous Ground Systems, areas that CertaSIM currently supports or conducts research in. It was a great opportunity for us to meet many of our customers in the Military Vehicle Industry and discuss new features in the IMPETUS Afea Solver®.

CertaSIM, LLC attended the ASME Pressure Vessels and Piping Conference (PVP) held from July 14th-19th, 2019 in San Antonio, Texas, USA. This Conference is an international technical forum to discuss and expand the knowledge on the topics related to Pressure Vessel and Piping technologies for the Power and Process Industries. There were people from over 40 countries in Europe, Africa, the Middle East, Asia, the Americas, and the Oceania islands. Some of the topics included Design & Analysis, Fluid-Structure Interaction, High Pressure Technology, and Seismic Engineering which are of great interest for our customers. 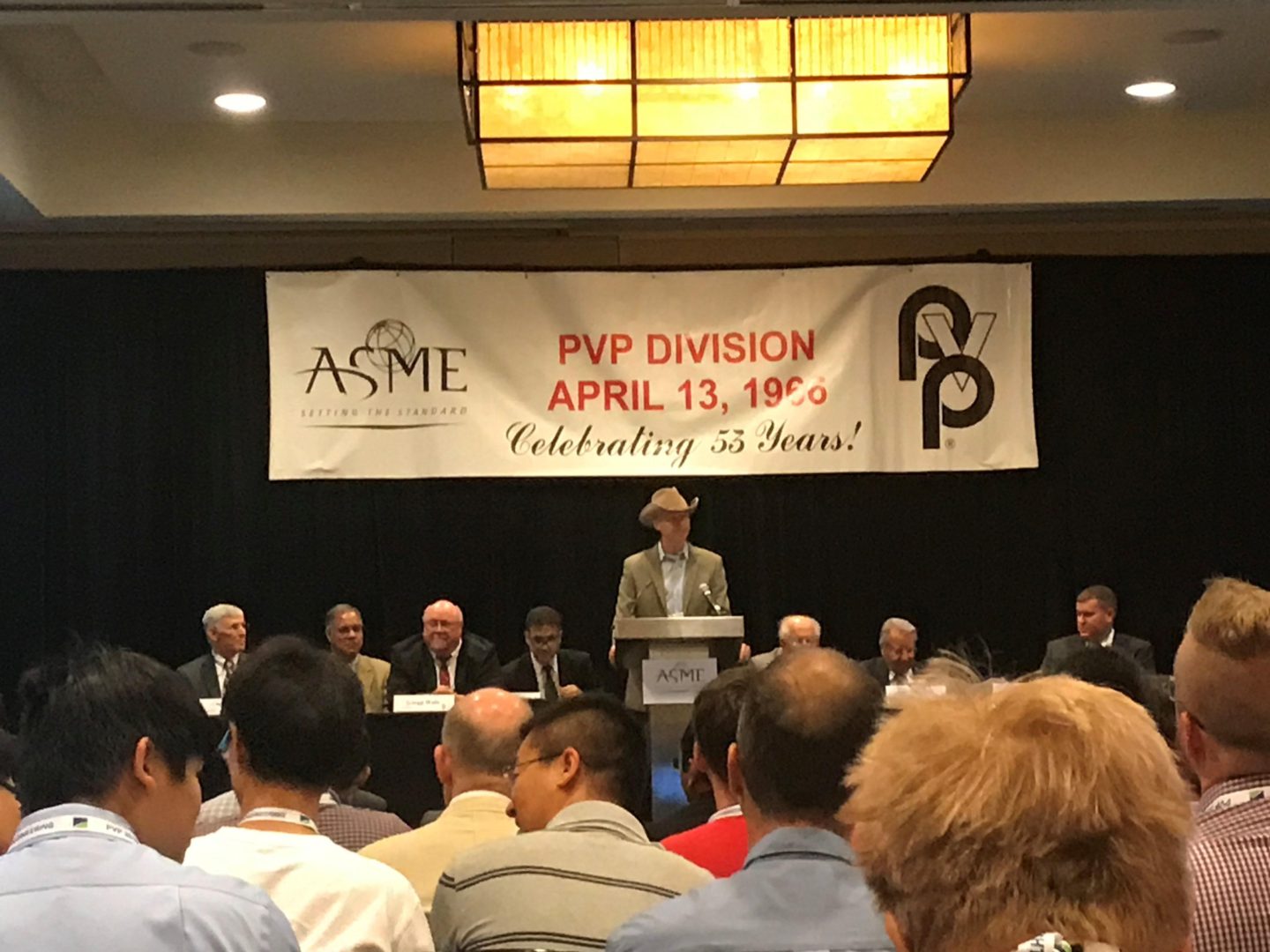 The IMPETUS Afea User’s meeting in Flekkeford Norway was a great success as the attendees shared their experiences. Attendance included IMPETUS users from many countries in Europe. Areas of interest focused on Defense related applications, such as ballistics, blast simulations, material modeling of high strength steels, modeling concrete under hypervelocity impact, etc. The IMPETUS development team gave presentations about new features in the solver and new GUI features such as object libraries and templates that provide increased productivity and allow for an easy but secure way to work on collaborative projects with other companies. 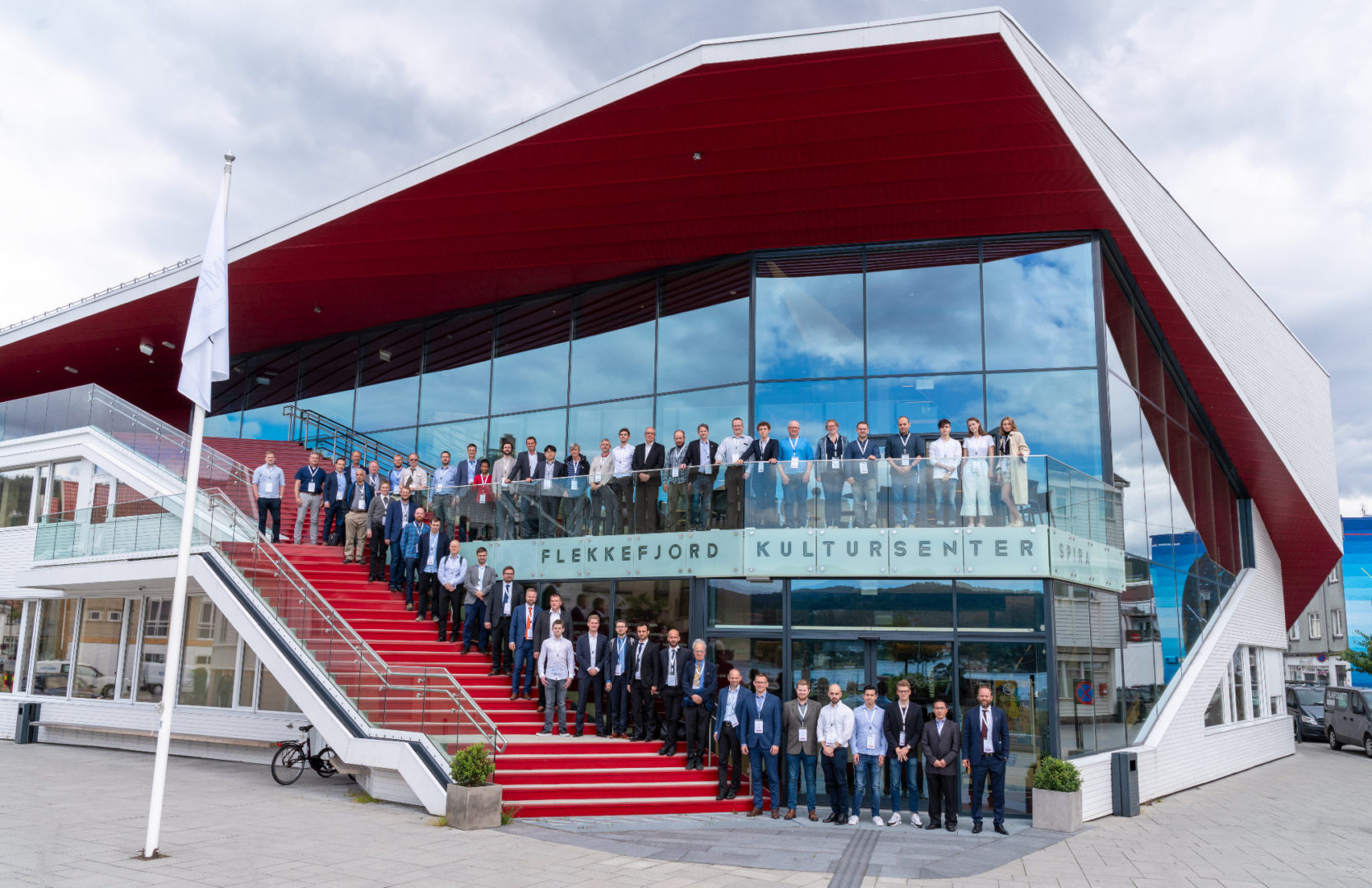 CertaSIM, LLC had the pleasure of participating in the 15th Hypervelocity Impact Symposium (HVIS) held in Destin, Florida, USA. CertaSIM displayed its new booth with dual projectors that showcased the capabilities of the IMPETUS Afea Solver® with special emphasis on simulations performed with the γSPH™ Solver. Our booth was positioned just outside the main conference doors which made for the perfect spot to display IMPETUS capabilities and resulted in many of the attendees stopping by to ask questions. The conference was well planned and executed – much thanks to the organizers for this fantastic conference where we really expanded our network. 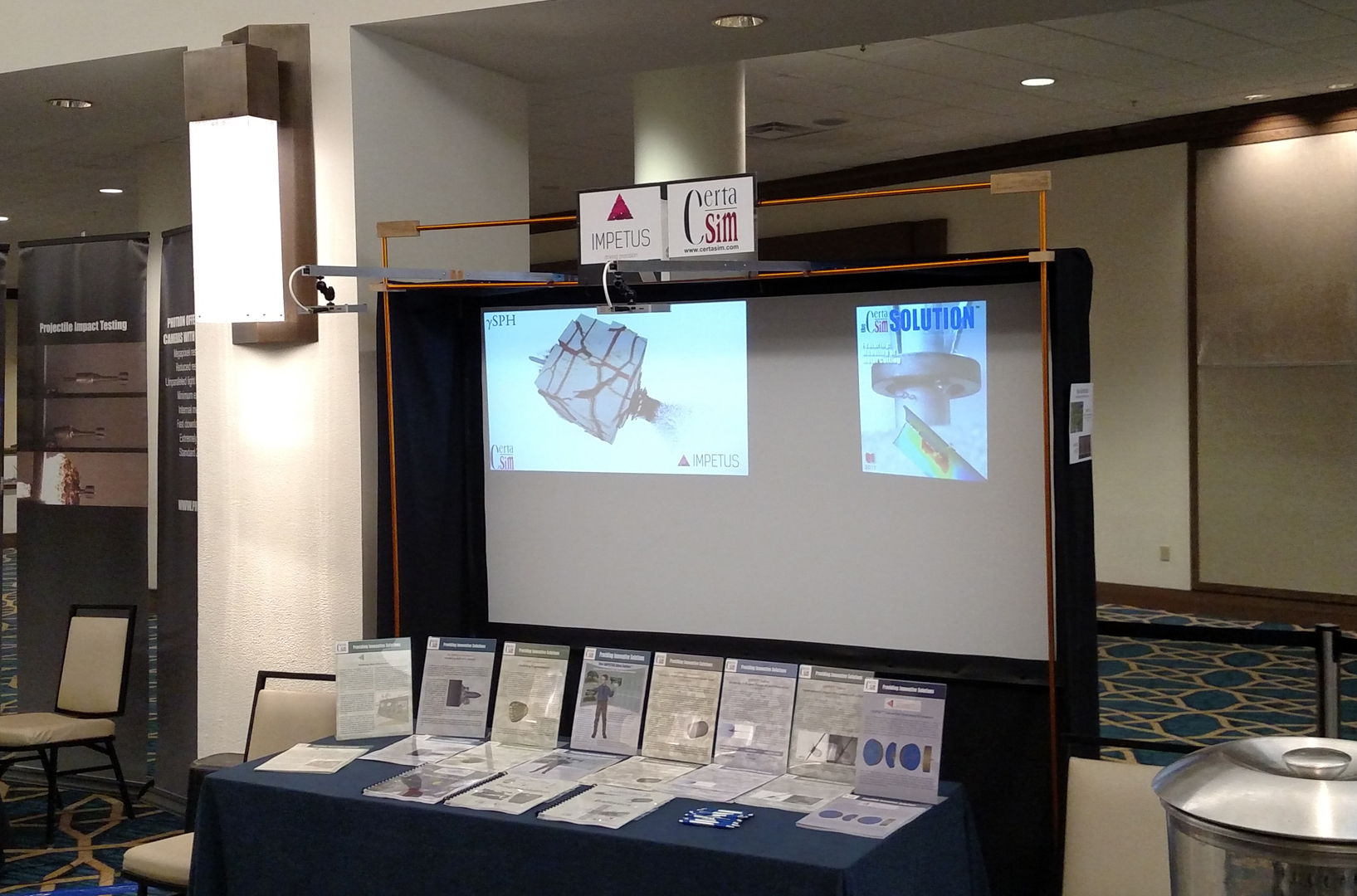 CertaSIM LLC, partnered with csimsoft, as a silver sponsor at the “Frontiers in Medical Devices Conference: The Role of Digital Evidence to Support Personalized Patient Healthcare” conference co-sponsored by the Biomedical Engineering Society (BMES) and the US Food and Drug Administration (FDA), held at the University of Maryland, Washington DC March 19th-21st, 2019. Many attendees were very interested in the IMPETUS Brain Impact Model video that we displayed at our booth. The model was developed by Professor Milan Toma at NYIT and couples the IMPETUS AsetTM High Order solid elements with the revolutionary γSPH™ algorithm. There were many interesting presentations and posters leading to good discussions with researchers and engineers that are interested in our Next Generation Solver technology. This is the conference to attend for the medical devices industry and we value the time spent with current IMPETUS users as well the chance to meet new customers.

The NVIDIA GTC2019 Conference was held March 17th-21st at the San Jose Convention Center. This is the 8th year that CertaSIM attended the conference and participated in the technical session. Mr. Kshitiz Khanna, Mechanical Engineer at CertaSIM presented a paper entitled “Modeling Fluid Structure Interaction with Multi-GPU Enabled Software”. The presentation is available from CertaSIM and NVIDIA also recorded the audio from the presentation and made it available to hear online. GPU technology is at the essence of the IMPETUS Afea Solver® massively parallel processing capabilities.

CertaSIM, LLC was represented at the “DoD Working Group on Computational Modeling of Human Lethality, Injury, and Impairment from Blast-related Threats” in Virginia, 05-06 February 2019. There were a little under 100 attendees discussing different aspects of modeling these applications. The two days workshop had many interesting presentations, one of them given by Professor Milan Toma, NYIT, about modeling the Human Brain with Fluid-Structure Interaction in the IMPETUS Afea Solver®. The workshop was a great success and CertaSIM, LLC obtained new valuable knowledge and expanded our network in this field. Thanks goes to DoD Blast Injury Research Program Coordinating Office, Fort Detrick and MITRE Corporation for hosting the event. 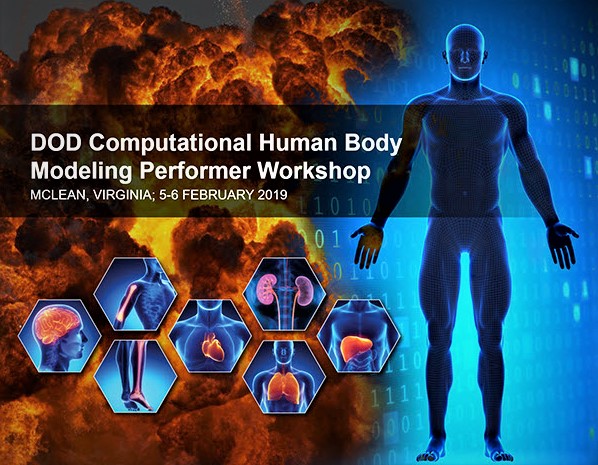 Ciara Technologies are experts in building overclocked professional workstations. They recently released the KRONOS 840-G4 which includes the latest Intel i9 Processors. The i9 processors provide larger core count, up to 18 cores and the Ciara machines provide machines that run up to 4.6 GHz for all processors all the time, where the base clock speed is 3.3 GHz. The Intel Turbo boost only operates for short durations to maximize performance and it only applies to a limited amount of the cores which means if your application uses too many cores the system defaults back to the base clock speed. Overclocking is quite different, all cores run at the higher frequency all the time which also includes overclocking the memory as well. The KRONOS workstations also include the latest liquid cooling technology for the CPU that insures a reliable system. The combination of GPU Technology for massively parallel processing and high performance CPU processing results in a workstation that rivals cluster based solutions. 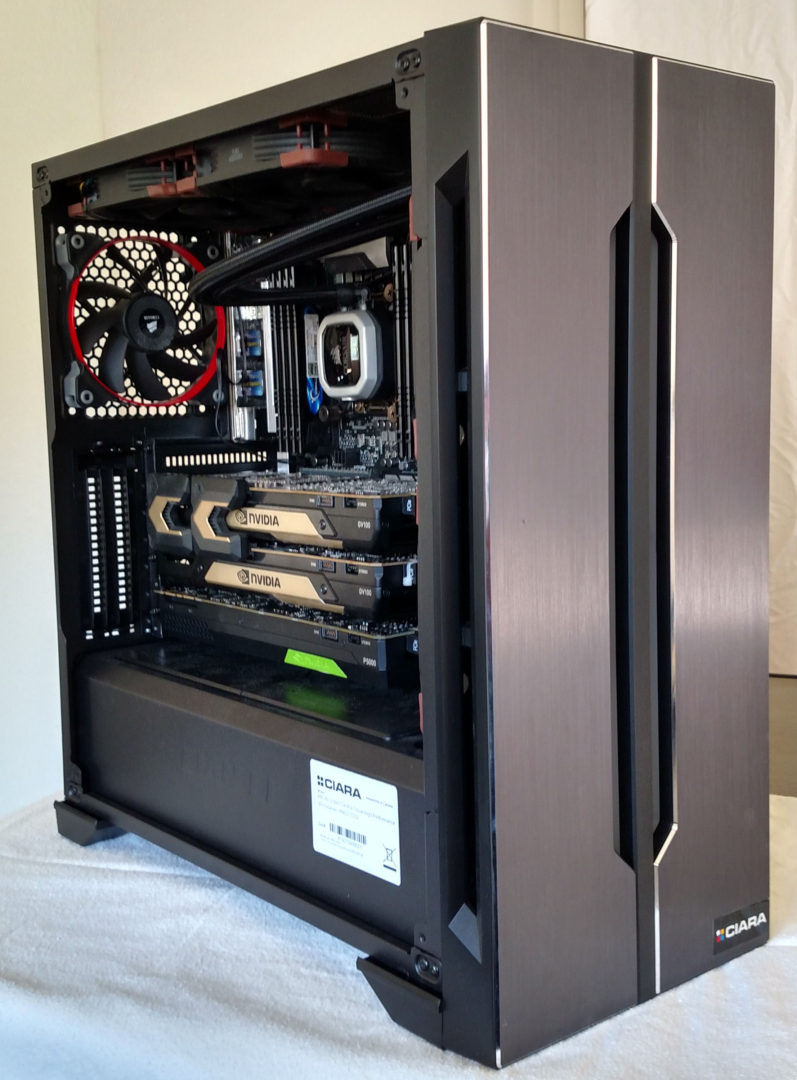 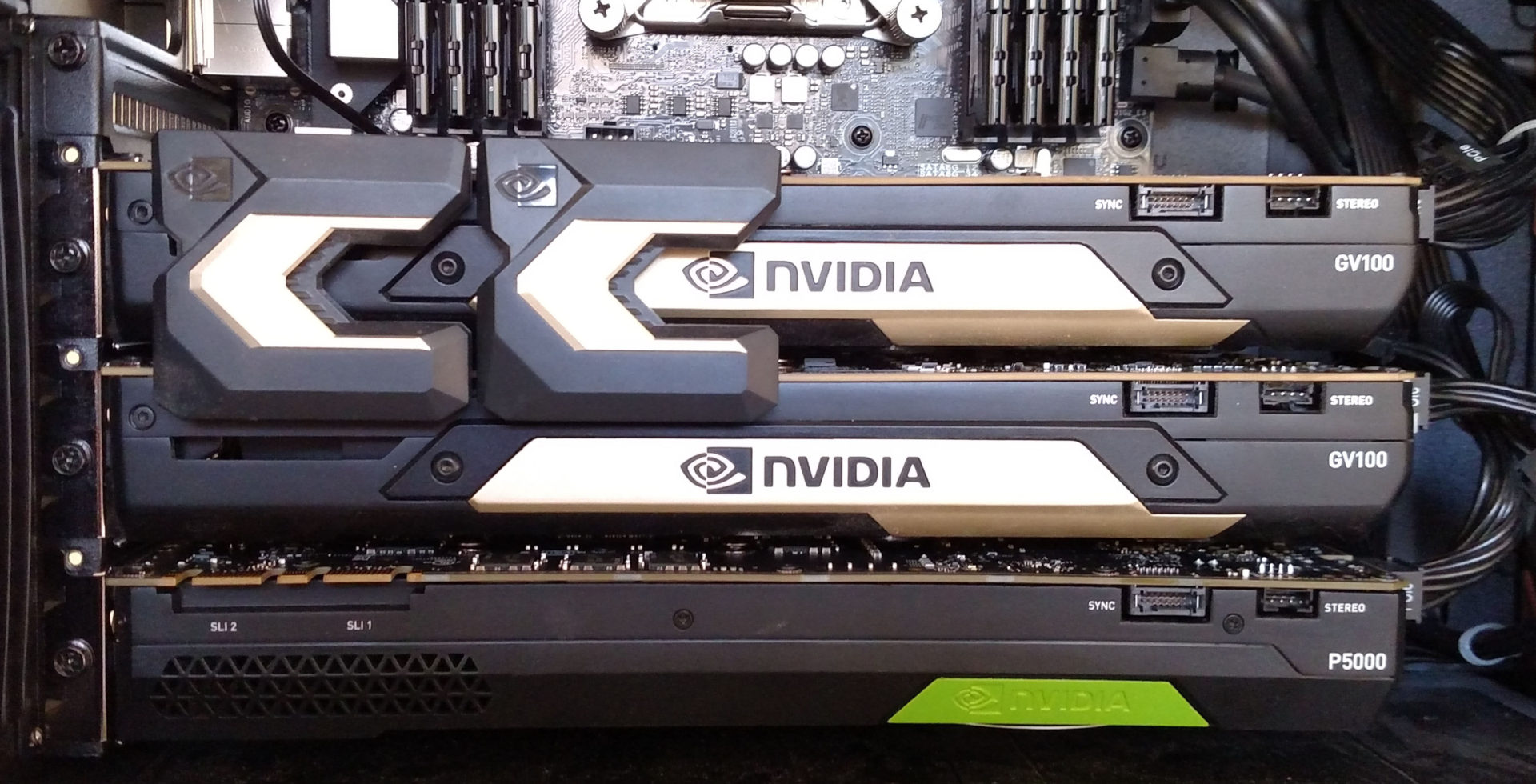 GPU computing continues to improve every time NVIDIA releases a new generation of processors. At GTC2018 held at the San Jose Convention center this past March, the CEO of NVIDIA, Jensen Huang, introduced the latest Professional Workstation GPU, the Quadro GV100 powered by the NVIDIA Volta. With 32GB of HBM2 memory, 5120 CUDA Parallel-Processing Cores and 640 Tensor Cores it leapfrogs the previous version, the GP100 that had 3584 CUDA Cores and 16GB of HBM2 memory and no Tensor Cores. To quote the NVIDIA Website:

“The NVIDIA Quadro® GV100 is reinventing the workstation to meet the demands of next-generation ray tracing, AI, simulation, and VR enhanced workflows. It’s powered by NVIDIA Volta, delivering the extreme memory capacity, scalability, and performance that designers, architects, and scientists need to create, build, and solve the impossible.” 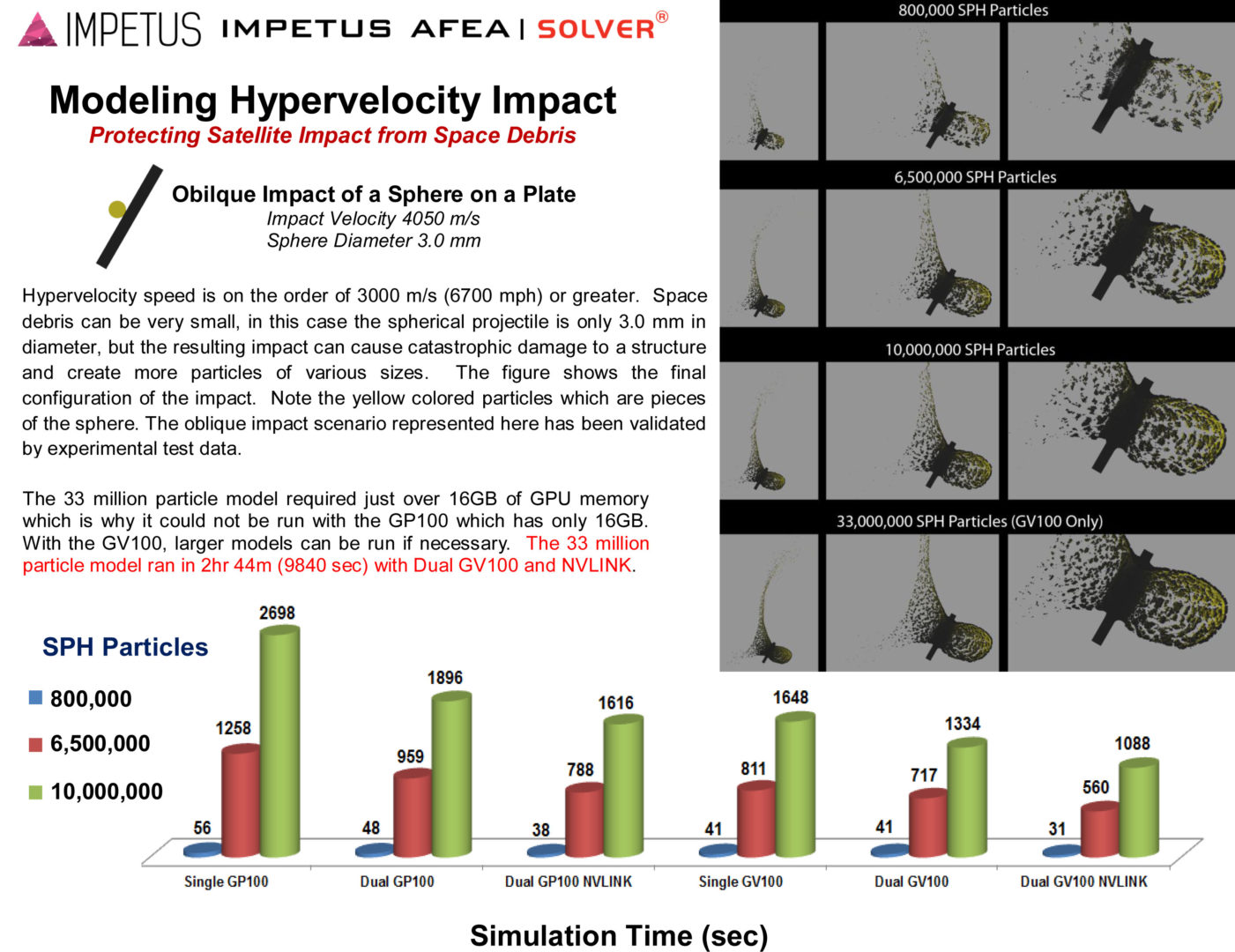 To compare with a cluster based solution, a similar 800K model took a whopping 20min on a 36 core cluster. Certainly no match for GPU massively parallel processing.